So this is a nice program and the PDF print out can be easily found online. But this is not a copy program, but will tell you what copies what. You type in the software’s name and it tells you what will copy it. The PDF online is for volume #8 and is 155 pages long!
If we didn’t have the PDF available then this program would be more useful. Also I prefer this program over the similar program called: What Copy’s What 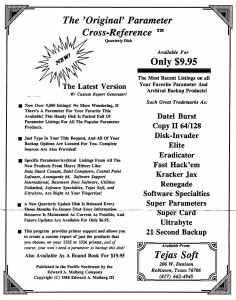 In this ad by Tejas Soft for the Original Parameter Cross-reference there is now over 9,000 listings. 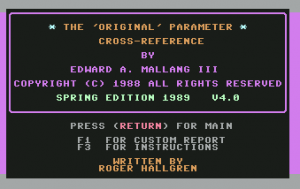 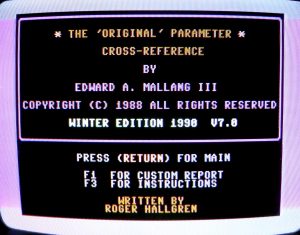 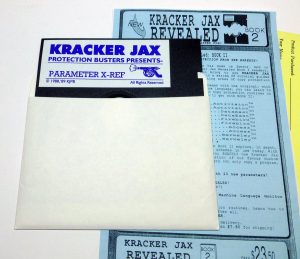 This is my personal Commodore Master Parameter reference. This picks up where the Original Parameter Cross Reference Vol#8 left off. I have over 1400 titles on this list about 25% that is not on the original list. I also only list THREE programs per title. I made this list for my own personal use and did not need to list every single parameter program, I decided three choices was enough.

Disk Lock protected your programs from most copy programs.
Place the protection on any tracks from 1 to 40. 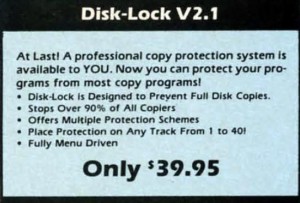 This title is know in the C64 world as one of the hardest to copy disk out there. 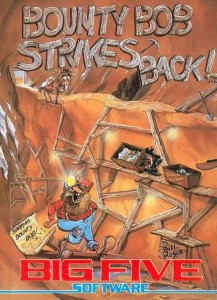 The only thing thought I knew of that could copy it was Jim Drew’s SuperCard+ and a custom copier.(Version 3 of the Supercard-Plus.)

There are also different version of this disk.
It is also reported that Big Five software never used mass duplicators.

C64preservation.com reports that most tracks are in custom GCR format offset 1/2 on each halftrack. Lower-grade version of Spiradisc-like protection from Apple II

Most of use know that Bounty Bob was likely to be the hardest C64 game out to copy. But have you tried to copy 21 Second back up? Well it pretty much impossible to copy also. It wasn’t until just recently that Jim Drew (interviewed here) maker of the SuperCard got his hands on an original copy of it. Here is Jim’s Quote from his post on LEMON64,

Goto the Lemon64 link above to learn more!!

Here in this ad there is a side note from Jim Sachs claiming that the delay in the release of his next game ‘Time Crystal’ will have to be delayed because of the rampant copying in the C64 industry.  They need this time to raise more capital and investigate more sophisticated protection techniques.

There was a demo/preview released of this game. See a screen shot below. But the final game was never released?
Why? I always had the feeling that the above was just a passive aggressive attack on software pirates. When they really need to buy time to get the game finished. OR was it just a publicity trick?

BUT what is the truth? Has Jim Sachs ever commented on this? Why not use RapidLok, V-Max, Vorpal, Fat Tracks, etc, some of these protection schemes had been out at this time. Or even the dreaded dongle? 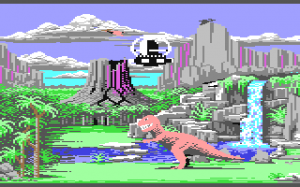