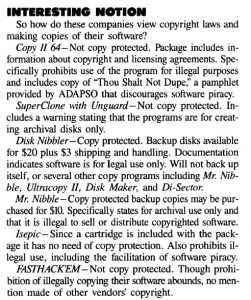 Memory Dumpers for the C-64 is from a 1986 issue of AHOY magazine and is an interesting article to read. It covers the ISEPIC, SNAPSHOT 64 and CAPTURE 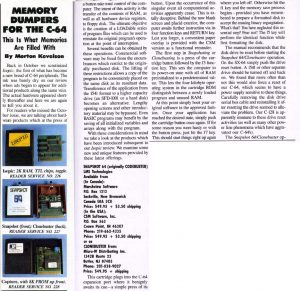 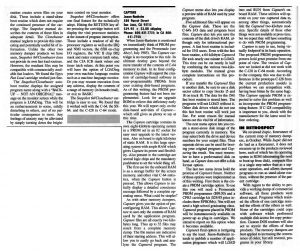 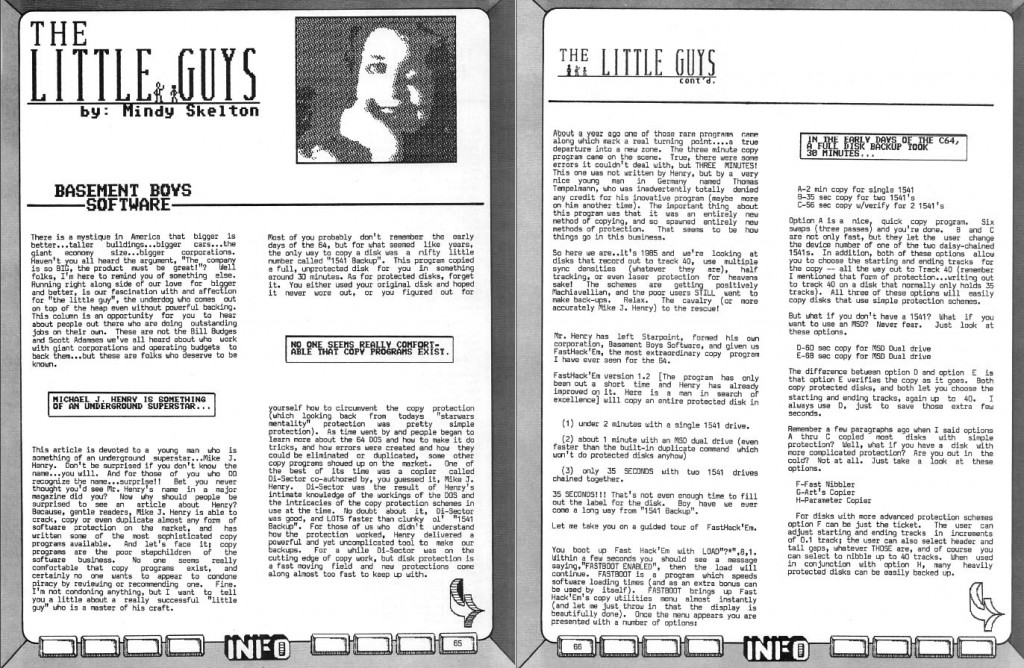 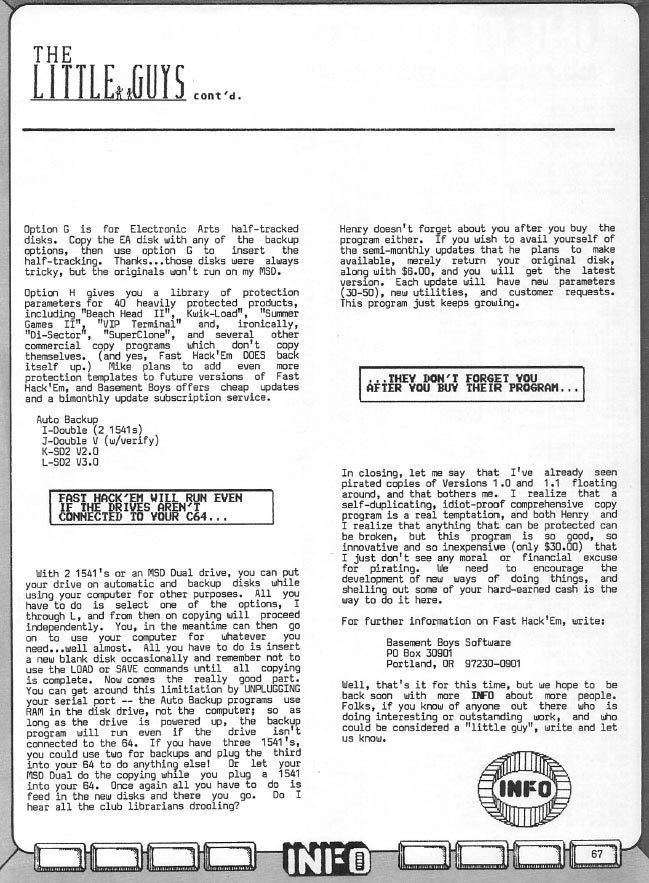 This is it, the first interview for this website.
I can not possible think of a bigger or better person to interview then Jim Drew.
You may not know the name, but Jim was one of the biggest and most important “players” in the cat & mouse world of copy protection. Jim wrote all of the copiers for Megasoft, Utilities Unlimited and Final Source Software.

What was your first computer job?
My first computer programming job was in 1978, and it was for a museum, writing an inventory system for a Commodore PET 2001. You know the type – 8K of RAM and a built-in cassette recorder. Smile

How did you learn the secrets of the 1541?
Well, I had some early help. I had been given a lot of information by Commodore in early 80’s about the 4040 and 8050 disk drives. When I started working for Commodore early 84, I obtained a completely commented source code listing for the 1540/41 disk drive. I of course experimented with a lot of the serial transfer and data separator code, but for the most part if I had a question I could contact someone at Commodore for an answer. I had a really good working relationship with Commodore, and I did all of the way until they closed.

How did you get started in the copy protection scene.
I wrote some copying software for tape drive to tape drive copies and for the 4040/8050 disk drives. I did some work with TRS-80 and Apple II copying as well. Of course the need to backup copy protected software prompted the need to learn how to do this.

What company did you work for.
I worked for Commodore when I was writing disk copy programs, and finally had to quit that job to do disk copying stuff full time. I had a lot of companies trying to get me to relocate to write software, but I liked where I was, and Megasoft was about 40 miles away – close enough where they could distribute my products and I could help with tech support. So, really only worked for myself and my companies.

What programs did you work on.
Oh man, I can’t even remember how many different programs I did. I stopped counting at 60 when I released SuperCard for the Amiga, and I did many products for the Amiga after that. I made sprite makers, BBS programs, disk copiers, copy protection routines for other programs, etc. I did a variety of programming and hardware design.

What made you decide to go with a hardware copy solution?
We needed a way to spool an entire track in and write one back out. It really is not possible to piece together a track successfully and duplicate all of the protection. So, hardware was the only way to accomplish this.

How did you come up with the idea for the Supercard?
It was the only way to spool a track. It really wasn’t an option, unless you wanted to add a parallel cable. I had gone that route initially, but it was such a messy solution – really easy to snag the cable, you couldn’t transport it easily to user group meetings, etc.. The reality is that nobody cared if a copy took 10 minutes, as long as it worked. So, an internal drive solution was the best choice.

What tools did you use to in development?
I used Commodore’s ML monitor to write programs in actual machine code and save them… that’s was far from fun. I did that with the PETs and Apple IIs too. I finally got Commodore’s assembler package from them and used that until I did work for Central Point Software. Copy II 64/128 was written with Develop64. This was because other assemblers were disk based. By this I mean that you wrote the code, saved it as a SEQ file and then ran the assembler which fetched the file(s) and did the assembly. Assemblies would take minutes every time. Develop64 was 100% memory based, so assembly time was blazingly fast. At Central Point, we got the 1541 Flash! and installed it into a SX-64. Using Commodore’s assembler with disk based assemblies were still really slow compared to Develop64. So, we decided to continue using Develop64 and I personally switched over for everything else I was doing outside of Central Point Software.

What language did you program it in?
Anything simple, BASIC. Everything else 100% assembly. If I did program in BASIC, I compiled it with DTL BASIC – because there was no decompiler for it.

What was the Easiest copy protection you found?
No write protect label! I would say that 90% or more of every commercial program that has no write protect notch cut in the original disk, tries to write to the disk as its first protection check.

What was the Hardest copy protections you found?
Bounty Bob Strikes Back! That program nearly drove me insane. I wanted to duplicate it, not crack it. So, after about 6 months worth of periodically monkeying around with various tests I was finally able to make a disk copying routine to duplicate the 1/2 track protection.

What was the Craziest, strangest or dumbest copy protection you found?
Craziest – Bounty Bob Strikes Back! Strangest – probably Mr. Nibble and some of the other copy programs. Dumbest – anything that rattled the drive head!

How did you get all the programs to test?
First, I worked for a Commodore store. My job was actually the technical support representative for educational accounts for the state of Oregon. I also worked in the service department and aligned disk drives on a daily basis. Our store sold just about everything available (at the time) for the C64. So, I was getting access to these programs. Later on, as part of a partnership, I owned part of several software rental stores. So, I had access to everything and made backup copies for our stores.

What was or is you views on copy protection?
It’s a necessary evil.

Did copy protection really stop people from making copies?
Yes and no. You have to remember, there were millions of C64s. There weren’t millions of people in computer clubs. For the most part, people used their computers as a entertainment. Most people had no idea that they should be backing up their programs. So, most people didn’t or tried with standard programs and just gave up. It’s only the die-hard group people (hundreds of thousands of them) that took on disk copying as a challenge and wanted to back up their software. So, I think copy protection as a whole worked to prevent the masses from stealing software.

Did you or your company get hate mail or threats from software companies trying to protect their software?
Funny. Initially, yes. However, as years progressed, it was the other way around. We would offer protection to commercial duplication houses. It was somewhat mob-like. They paid us for ‘time’. We would give them 3 months or 6 months before we would provide the routines or information on how to duplicate their protections.

There were dozens of copy programs out for the C64, how did yours stand out from the others?
We had real-time support, and the largest collection of software available for testing. In most cases we would have software before stores like Toys R Us, Kmart, etc. would have them on the shelves. So, we already knew how to duplicate the programs before people had them in their hands. So, our customers were always going to be ready to back up their software.

Do you still own a Commodore 64 and when was the last time you turned it on?
Well, actually I use a C128…. every day. I am selling Commodore products right now on eBay, and I will be setting up a retro-computing website to offer old products and create some new ones as well.

Current project or websites that you would like to promote here?
As many people know, I am making a SuperCard Pro. This uses any standard PC disk drive (5.25″ or 3.5″) to duplicate any disk format. It’s a 2012 version of the SuperCard+ without the limitation of the disk drive hardware. It’s my hardware, with floppy drive mechanics. So, much like SuperCard Ami (Amiga version) I can duplicate any format of disk. The unit will run as a stand alone unit or can be operated by anything from a C64 to a Linux machine (and everything in between). More information will be available once I put the website online.

Anything you would like to add that I didn’t ask?
It’s fun to get back into this again! Smile

The end!
Again, I must thank Jim so so much. I can not truly express how thankful I am to him for giving me the first interview for this website!