DUPLIKATOR is the fastest, most efficient and easiest to use disk copying system ever conceived! (from their ad)

Datel’s DUPLICATOR is amazing, it has two components a main board with 256K RAM which plugs into the Commodore 64’s cartridge port and a parallel cable with connects between the Commodore 64’s User Port and the 6522 VIA chip inside your Commodore 1541 disk drive. No soldering is usually required.

DUPLIKATOR’S Key Features –
– Copies whole disk in one pass – only one drive required!
– Make Backup Copies in eight seconds!
– DUPLIKATOR is the fastest, most efficient and easiest to use disk copying system ever conceived!
– Comes complete with 256K on board ram and it’s own operating system – no software to load!
– Makes multiple copies from one master!
– Full disk verification during back-up process!
– Copies standard software as well as errors 21-29 and up to 40 tracks!
– Full disk error check in 8 seconds!
– A must for clubs, user groups etc. How else can you copy over 250 disks an hour for less than £100? 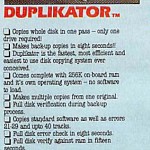 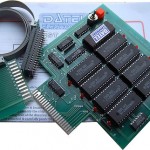 1 thought on “Duplikator by Datel”